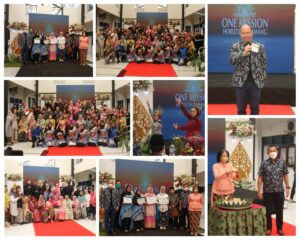 Last August 24, Horizon Karawang held its first Employees’ Assembly at the STIKES Quadrangle of the campus in West Java, Indonesia. Present at the assembly was Dr. Chito B. Salazar, President and CEO of PHINMA Education, which manages tertiary institutions for Yayasan Triputra Persada Horizon Education.

The Horizon Karawang family opened the event with a dance presentation that combined traditional and modern dance while wearing traditional attire, followed by an angklung performance. Angklung is an Indonesian musical instrument consisting of two to four bamboo tubes suspended in a bamboo frame, bound with rattan cords. It was inscribed by UNESCO as an Intangible Cultural Heritage in 2010.

Not to be outdone, Horizon Karawang students performed the Jaipong, a popular traditional dance of Sundanese people which features a lively interplay between the drummer and the ronggeng and movements derived in part from the traditional martial art pencak silat.

Outstanding employees for the Academic Year 21-22 were awarded before the cutting of the tumpeng, a cone-shaped rice dish whose shape, color, and items are a symbol of the relation to God, prosperity and guidance for Javanese people in their daily lives. Human Resources (HR) Officer Shafira Arli Amalina describes the ceremony “as a symbol of the blessing of new beginnings.”

To conclude the assembly, Dr. Salazar thanked the Horizon Karawang family and reiterated the importance of one mission across all PHINMA Education schools, emphasizing that making lives better through education is a mission that transcends geographies and cultures.

Horizon Karawang is the first of a planned network of schools across Indonesia.

BACK TO NEWS AND ARTICLES | READ NEXT